*Work exchange or reduced fees may be available to students who would otherwise be unable to attend.

Plan to arrive by 3pm on Hashinkyū-ji day, Tuesday.  Meal instruction will be offered at 5pm and a simple informal evening meal at 5:30. Evening zendo will be from 7pm to 9pm.

Please let us know if you will need airport transportation or if you have special needs, i.e. food allergy, medical condition, accommodations in regard to the sesshin schedule, by contacting us at office@rinzaiji.org

A link for registration will be sent shortly to those who email us with their interest in/intention of joining the sesshin. 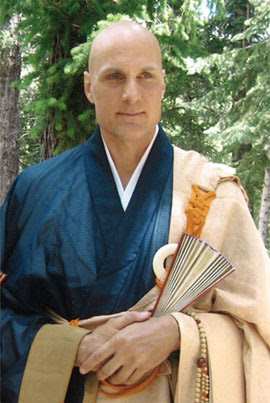 A year later he established himself as a permanent Tathagata Zen practitioner at the Rinzai-ji Temple in Los Angeles and underwent formal koan study under Kyozan Joshu Sasaki Rōshi. Known for his uncompromising standards of practice, this Japanese Zen master was one of the few masters of the Tathagata Zen tradition to teach in the West.

In 1990 Kigen moved to the Mount Baldy Zen Center and was ordained as a monk. In this first level of training, the student is fully immersed in the strict monastic environment and must undergo intensive koan training. It is a system of increasingly complex existential questions that can only be answered through non-intellectual approaches.

In this way, in the Zen tradition, “understanding through experience” is taught along with a unique philosophical understanding. In the 40 years since the Mount Baldy Zen Center was founded, few have completed the monk training program there and thereby been granted the role of Oshō (Zen Priest).

After nine years of training on Mt. Baldy, Kigen was promoted to Oshō and commissioned to return to Los Angeles as vice abbot and teacher at  Rinzai-ji Temple. Rinzai-ji is the main temple of the Tathagata Rinzai Zen lineage brought to the United States by Kyozan Joshu Sasaki Rōshi.

Four years later, Kigen was given the opportunity to lead a new meditation group and founded the Hollywood Zen Center to meet the needs of Zen practitioners in the Hollywood area.

In 2010, the founder and abbot of the Bodhidharma Zendo, Seiun Genro, Oshō, passed away. Seigaku Kigen, Oshō was invited to serve as a Zen teacher in March, 2012. In this capacity, he leads meditations, gives Dharma talks and offers his students guidance in the practice of  Zen. Since November of 2019, Seigaku Kigen, Oshō has been the abbot of the Rinzai-ji Order Austria.